What: ¡HOLA! TV, a new Spanish-language TV channel that reflects the lifestyle and entertainment content of iconic magazines ¡HOLA! and HELLO!, launched on DIRECTV channel 430 on May 1.
Why it matters: With its debut in the U.S., ¡HOLA! TV expands the ¡HOLA! and HELLO! brand and lifestyle to the US Hispanic market. 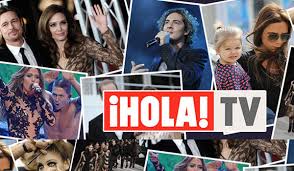 ¡HOLA! TV is a joint venture between ATRESMEDIA TELEVISION, a media conglomerate company from Spain, and ¡HOLA! Magazine. ¡HOLA! TV programming features the best of ¡HOLA! Magazine reimagined for television, with news, exclusives and special content that mirrors the philosophy and style of the ¡HOLA! brand.  ¡HOLA! TV is headquartered in Miami, Florida, where it also produces two daily and three weekly original shows from their studios at Imagina U.S. Another one of their weekly original shows is produced by ATRESMEDIA TELEVISION, studios in Madrid, Spain.

Ignacio Sanz de Acedo , CEO & GM of HOLA! , told Portada that 95 % of content will be produced out of Miami and the rest out of ATRES MEDIA TELEVISION headquarters in Madrid, Spain.

95% of the content produced will be produced in Miami, we do it together with our parent company in Spain so as to maintain an editorial line

HOLA ! TV was launched in Latin America six months ago and contents are also produced in Miami. “Regarding advertisers, we are still analyzing what will be the best way to structure the sales effort. We are Looking for sales representatives both for Latin America and the Hispanic market in the U.S. ,” Acedo told Portada .

¡HOLA! magazine boasts 30 editions reaching over 120 countries around the world, and a weekly readership of 20 million worldwide. The magazine was founded in 1944 in Barcelona. The magazines launched in Central America last year.

“Our goal has always been to position ¡HOLA! TV as a trusted and respected source for celebrity news and exclusives for both the Latin American and US audiences,” said Ignacio Sanz de Acedo, CEO and general manager for ¡HOLA! TV.

“We are pleased to be the first to introduce ¡HOLA! TV to our Spanish-speaking customers across the U.S.,” said Emma Brackett, vice president, Content and Programming, DIRECTV. “¡HOLA! TV’s refreshing take on entertaining human interest stories and original programming is a welcome addition to our Spanish-language programming lineup and will delight Hispanic customers everywhere.”

Among the new programing acquisitions ¡HOLA! TV will have • Royalty Special Reports. • Travel in Style and • The Time in Between (El tiempo entre costuras).

What: Grupo ¡HOLA! will launch pay TV channel ¡HOLA! TV and begin broadcasting in Latin America and the U.S. in the following weeks.
Why is it important: Traditional media have acknowledged the fact that they need to expand to multiple platforms so as to reach new audiences, stay on top-of-mind and diversify their business.

Yesterday it was officially announced that Grupo ¡HOLA! has partnered with ATRESMEDIA TELEVISION to launch pay TV channel ¡HOLA! TV. It will begin broadcasting in the coming weeks throughout Latin America and the U.S.

The new channel’s programming will include original productions created specifically for Latin American and U.S. Hispanic audiences and will share common themes and content with the magazine, including access to high society, royals, icons, human-interest stories and fashion, as well as the brand’s famed aspirational and lifestyle content.

¡HOLA! TV will be produced in Miami and based at Imagina US’ studios. The network will be overseen by the newly appointed Chief Executive Officer and General Manager Ignacio Sanz de Acedo, who has 18 years of experience in the industry, beginning in Discovery Networks in 1995. Before joining ¡HOLA! TV, he served as senior vice president of Ad Sales for E! Entertainment Television Latin America, where he oversaw implementation of operational, sales, marketing and programming strategies spanning 15 countries that boosted revenue by 400%.

The top executives that will join Sanz de Acedo’s senior leadership team are Raúl García-Diez, of ATRESMEDIA TELEVISION, who will oversee original productions and collaborate with ¡HOLA! editors throughout the world; Patrick Ilabaca, who will lead marketing, communications and creative services and thus will be responsible for the overall promotion, positioning and development of the brand; Maggie Salas-Amaro, head of programming and acquisitions, in charge of buying content for the channel and shaping its programming offerings through the acquisition of popular television shows and series, and Marcos Pérez Salvador, Chief Financial Officer for the network.