NewsCred, Inc. is a content marketing and syndication platform that offers  publishers and brands a single place to license text, images, and video from leading publications including The New York Times, Forbes, Reuters, The Economist, Los Angeles Times, Associated Press,The Mayo Clinic, Bloomberg and Financial Times.NewsCred sits in a middle position between content creators and content marketers, providing access to curated content and the software that lets brands manage, publish and track it. It contracts with major publishers, as well as freelance content producers, in order to offer licensed content to brands and marketers.

The platform has recently expanded into Latin America, forging licensing agreements with a variety of LATAM publishers, including AFP Espanol, Huffington Post Voces, EFE. It also has translation rights to English-language sources including Popular Science, the Daily Telegraph and Sauveur. 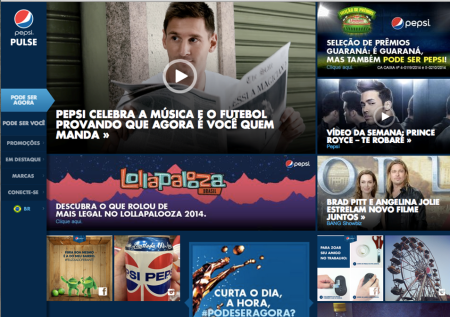 The South American expansion enabled the company to extend its existing relationship with Pepsi, in which it helped the beverage company to recreate Pepsi.com from a corporate-information site into a multimedia consumer portal called Pepsi Pulse. Pepsi Pulse content is now tailored to over 80 local markets, allowing Pepsi to create a global brand campaign on a hyper-local level. The content is heavy on entertainment – sports, movies, pop culture and celebrities.

A month after launch, the revamped site drew 87 percent more unique visitors than the previous month, along with a 2700 percent increase in social referrals.

NewsCred focuses on what Kayvan Salmanpour, NewsCred’s vice president of international, calls “content-driven performance.” He says, “We want to focus on how the content is having an effect on lead generation, driving more leads to the sales team or having effect on tangible retention. On the B2C side, how does it lead to deeper engagement and drive traffic back to our client’s site?”

Skyword is another strong player in the content marketing services sector that has been present in Latin America for some time now.

While brands need content to entertain consumers, entertainment content publishers need eyeballs, so they contract with “discovery platforms” like Outbrain, Taboola and others, to put links to selected content in front of consumers who are likely to be interested, based on the vendors’ proprietary algorithms. (Earlier this month, Outbrain partnered with NewsCred to bring together content discovery for publishers and content licensing for brands.)

Outbrain, which partnered with Univision to reach Hispanics in the U.S. in 2012 and is now in 16 LATAM markets, uses more than 50 algorithms to determine what content to suggest to individual consumers, and these algorithms can be adjusted based on a client’s needs. Erik Cima, general manager for LATAM at Outbrain, says that the company has found that, while consumers everywhere have individual interests, there isn’t a big difference in their behavior from region to region in terms of what he calls “clicky” content.

Get the  HISPANIC CONTENT MARKETING REPORT: Sector to grow to US $3.51 billion by 2018 (Portada Premium Report)

Efe will accommodate RTVE personnel at the news agency’s bureaus in Mexico City, Bogota and Moscow as well as in Rio de Janeiro, if the broadcaster decides to station a correspondent in the Brazilian city next year. The plan also calls for journalists at Efe bureaus in locations where RTVE is not represented to provide reporting for the broadcaster.

That arrangement will be tried first in Buenos Aires and, if all goes well, is to be extended to Havana, Tokyo, New Delhi and other foreign capitals where RTVE does not have a presence.

Efe is the world’s No. 4 news agency and the largest Spanish-language service, with more than 3,000 professionals working in 120 countries.