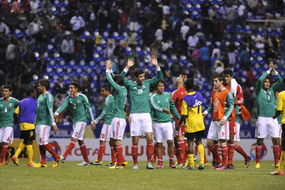 Unilever is expanding its deal with the Mexican National Soccer team for three more years until 2015. The announcement was made by Maria Teresa Rosell, Brand Marketing Director at Unilever, during a party to watch the Mexico – USA Fifa World Cup Qualifier last night in New York City.

Since 2009 the Mexican National Soccer Team has been sponsored exclusively by Unilever deodorant brand Degree Men. Perhaps because of budget reasons,  several food brands have been now added to the roster:  Hellmann’s®, Best Foods®, Ragú®, Knorr®, Country Crock®, Bertolli®, Breyers® and Popsicle®.
The marketing concept has been  expanded to include food and embrace the idea of celebrating football match parties at home and enjoying food products. Tu Selección, refers to the Mexican National Soccer Team but also to Food selection (choice). Russel Lilly, the director of multicultural marketing at Unilever, said: “Unilever is thrilled to tap into its brands to bring forth new experiences in Hispanic homes, especially during soccer game viewing parties. Our partnership with the Mexican National Team and creation of Tu Selección brings these moments to new heights through exclusive insider access, even bringing legendary players closer to their fans.”

The concept has been  expanded to include food and embrace the idea of celebrating football match parties at home.

The campaign will include sweepstakes at TuSeleccion.com, events, retail activations and digital advertising to drive traffic to TuSeleccion.com. TuSeleccion.com is hosted within Unilever’s Hispanic Content Marketing platform ViveMejor.   The deal also includes hospitality and player appearances as well as pitchside LED branding for all Mexico games broadcast on Univision and ESPN in the US.