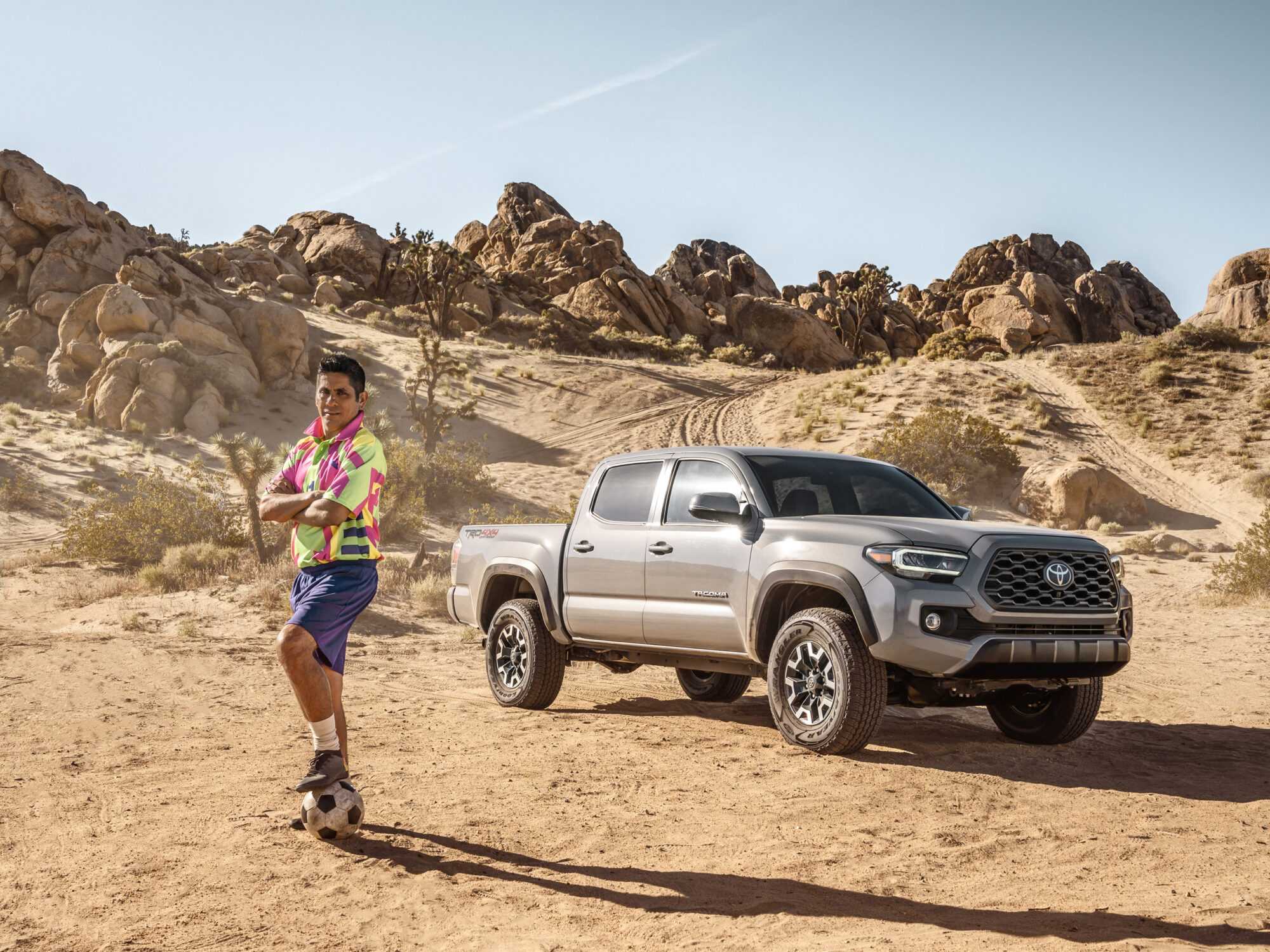 We talked to Terry Sell, national truck manager at Toyota Motor North America, about Toyota’s recent soccer campaign featuring Jorge Campos.  Toyota is one of the top 10 spenders in broadcast TV advertising, with $157 million spent in 2017. Through the campaign “Choose the Toughest Field”, the car company has managed to reach out to three audiences: Hispanics, soccer fans, and car lovers. Here’s what Sell had to say.

Portada: Tell us what the “Choose the Toughest Field” soccer campaign is about.

Terry Sell: “The ‘Choose the Toughest Field’ soccer campaign is the 2019 soccer platform for Toyota. It builds powerful connections between the sport of soccer, players, fans, and trucks. The campaign was inspired by some of the more traditional playing conditions in Latin America. We considered that soccer is often played in dirt fields rather than nicely groomed grass. Those tough fields are where players exhibit their true potential, just like our trucks. The campaign’s commercials capture the toughness of the Tacoma and Tundra trucks as they take on tough terrains in a rough, non-traditional environment, thus their connection to the sport.”

To learn about another automotive brand that is reaching out to U.S. Hispanics, read  How to Market to Hispanic Consumers According to Kia’s Senior Director of Multicultural Marketing.

P: Who is the target of the campaign?

P: On which platforms will it appear?

TS: “The campaign broadcast elements were timed for the 2019 Concacaf Gold Cup. But it will continue through March 2020 on other soccer media properties that we sponsor such as the UEFA Champions League, the U.S., and Mexican National Teams and Liga MX.”

P: Why did you choose retired Mexican goalkeeper Jorge Campos as your spokesperson?

P: How will you measure the success of the campaign?

TS: “Our goal is to drive consideration for Toyota trucks by increasing model association within their competitive set, and elevate ad awareness, vibrancy, opinion, consideration, and imagery. On the ground, through our interactive footprint at events, we are looking at engagement levels that funnel into sales leads.”

P: What other activities will you do around the campaign, off-screen?

TS: “The campaign has a diverse and robust digital and social component, including videos and rich mobile display ads and banners. For our social channels, we teamed up with Jorge Campos to develop a series of soccer technique videos. These showcase his great foot skills to engage guests in the sport.

P: Does this campaign appeal to any other market apart from Hispanics?

TS: “Soccer is part of the Hispanic culture. It is part of their life and brings generations together to enjoy the game. In fact, we know that Hispanics over-index when it comes to viewership in the U.S. With that in mind, our campaign fully focuses on this important target market for our brand.”

This is not the first time Toyota uses a Mexican celebrity to reach the Hispanic audience. Check out the campaign with movie star Diego Luna.

P: What challenges do you face with this campaign and how will you overcome them?

P: What else are you working on?

TS: “As I mentioned, our campaign ambassador, Jorge Campos, engaged with us on a series of videos showcasing soccer techniques. In August, Jorge Campos hosted a soccer clinic at one of the Toyota Copita Alianza youth tournaments. We’ll also recognize a stellar student-athlete with a scholarship for their outstanding accomplishments in the classroom and on the field as part of our partnership with Alianza de Futbol.”