Multicultural Marketing Today: Officially Dead or More Important than Ever?

The fate of multicultural marketing is a hot-button topic, with some saying it’s officially “dead” and others arguing that it should be more important today than ever. As minority ethnic groups shaped the evolution of the U.S. population in recent years, multicultural marketing became a hot topic in every corporate marketing department. Smart brands started to invest significant effort in strategies to reach ethnic groups with distinct cultural and ethnic behaviors and values. Best practices emerged, but marketers often stumbled and struggled to get it right.

Today there is a wide range of views on multicultural marketing among industry leaders. Here, we look at a range of perspectives on how brands can form genuine, long-lasting connections with diverse audiences. 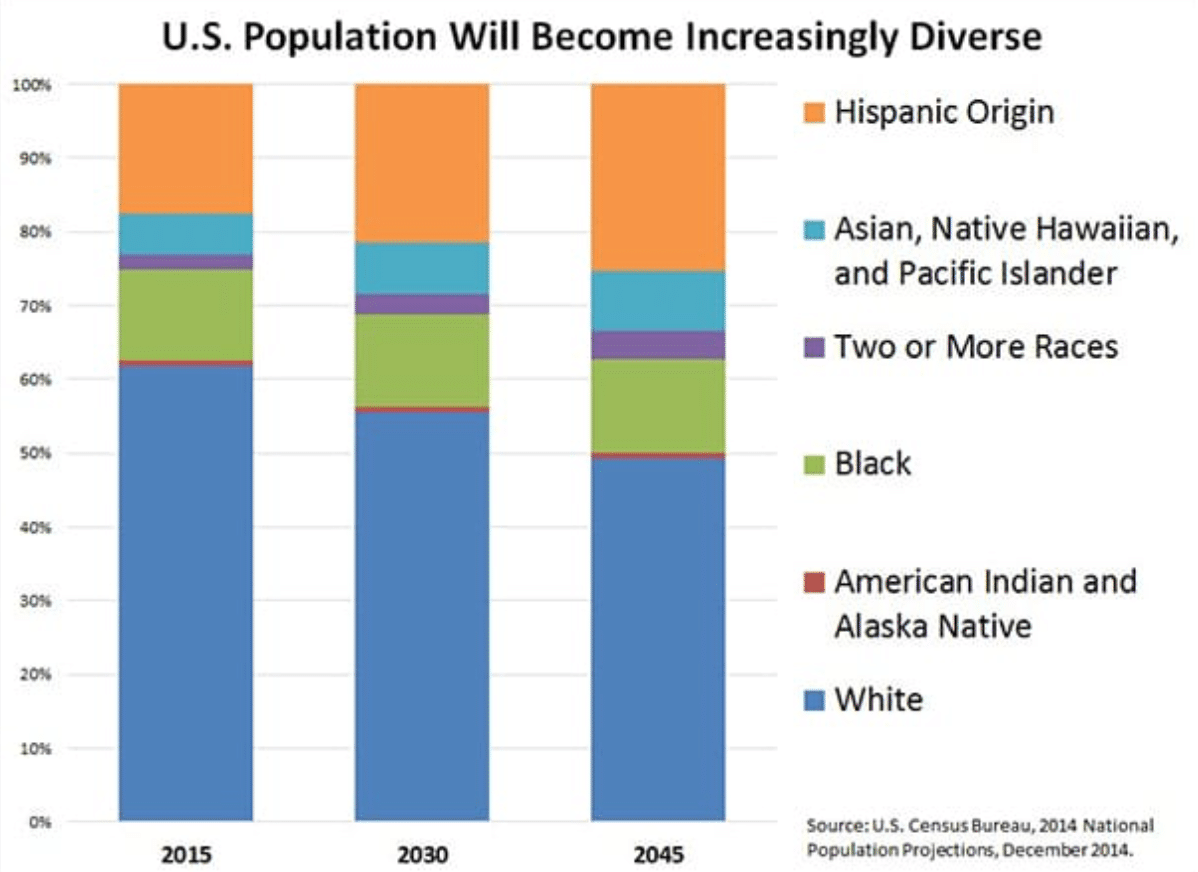 In fact, diverse ethnic groups are so significant to the makeup of the U.S. population that the Census Bureau recently launched a $500 million marketing campaign in 13 different languages aimed at reaching multicultural audiences. For the first census to go digital, the U.S. government is making a massive effort to reach 99% of the population. In today’s America, that requires significant effort to reach niche ethnic audiences.

While this year’s census is sure to provide important insight on population trends, the government predicted that by 2020, U.S. Hispanics will make up 29 percent of the growth in real income and are expected to add more than $1.3 trillion in buying power. Despite all this, multicultural ad spend only makes up 5% of marketing budgets today.

Latinx, Asian and African American populations now have a combined population of 130 million, making up almost half of the population. With the massive growth of these demographics came a shift in the marketing world. The big question was this: How do cultural differences among ethnic groups shape different lifestyles, preferences, and values? And how can marketers better target these different groups with tailored products, messaging, and campaigns?

Multicultural marketing became both a buzzword and a real concept: Entire departments and agencies dedicated to targeting diverse audiences emerged. But as ethnic minorities become the new “majority” in the United States, some have argued that the term is obsolete.

After all, if such a significant slice of the American population is multicultural, then what exactly is the general market if not a mix of diverse cultures? Some marketers have begun to argue that in a “minority-majority” country, treating different cultural groups as separate from the general market no longer made sense. Today, the fate of multicultural marketing is a hot-button topic in the industry, with some saying it’s officially “dead” and others arguing that it should be more important today than ever.

Some marketers have begun to argue that in a “minority-majority” country, treating different cultural groups as separate from the general market no longer made sense.

Minorities don’t believe they are being represented in ads

Brands’ failure to reach diverse audiences is reflected in the attitudes of minorities themselves. A recent study by Adobe found that nearly three in four whites (74 percent) believe their race/ethnicity is represented in the ads they are served, compared to 26 percent of blacks and only 10 percent of Hispanic/Latinos.

Some argue that multicultural is the new general market

Those that argue that multicultural marketing is dead focus on the fact that there are now so many ethnic minorities shaping the U.S. population that they have become the new general market. They argue that treating ethnic minorities like distinct audiences reflects an attitude that pits assimilation against multiculturalism and provokes cultural boundaries instead of inclusion.

This attitude would imply that diversity and multicultural departments, multicultural agencies, and segmentation by ethnicity are all unnecessary. At the same time, it would lead to new approaches to marketing that look at the general market with an appreciation for how cultural forces and fusions shape trends and consumer behavior. Concepts like cross-cultural and poly–cultural marketing are emerging. Some find this exciting, not discouraging.

Diversity and Inclusion important, but not the same as multicultural marketing

Despite the growth and purchasing power of multicultural populations, corporate America tends to look for blanket approaches to addressing diversity. There has been a recent increase in the number of “Diversity and Inclusion” programs in corporate offices. This is an important effort that is effective in creating an inclusive space for diverse voices in the workplace, but it is not the same as maintaining multicultural marketing practices.

Corporate brands need multicultural marketing departments because representing diversity in the office through “Diversity and Inclusion” programs is not the same thing as investing in strategic initiatives to better market to multicultural audiences. The former looks inward to shape corporate and workplace culture, and the latter looks outward to grow business.

According to a study by Kantar Consulting, 92% of Hispanics believe that it feels natural to live in the U.S. and connect to its culture but  retain the culture of their country of origin.  57% of Hispanics believe that the Spanish language is more important to them today than it was just five years ago. And 62% of younger Hispanics – the ones who feel particularly unrepresented in the market – reported becoming more interested in the Spanish language. Brands looking to connect with emotions and themes that truly connect with Hispanic audiences should look to their cultural roots for sources of inspiration.

Smart brands are turning to multicultural to reinvigorate, strengthen image

Some marketers have identified and built strategies around these opportunities. Large brands across the country are betting big on multicultural to transform their brands and, in turn, lead to significant growth.

Fast-food chain Denny’s is one example. The brand is looking to target young, multicultural diners with their campaign “See You at Denny’s,” which focused on illustrating a diverse, relaxed, and comfortable brand.

John Dillon, Chief Brand Officer at Denny’s, explained to Forbes: “It was important for us to tell our story to multiple audiences and to make sure we’re speaking to the cultural nuances of African-American consumers and Hispanic consumers, as well as the total market. Working with these three agencies executes those nuances and allows us to share who we are as a brand and the inclusivity and diversity that we stand for. We are a family brand and always have been and we are recognizing that the American family has evolved.”

Procter & Gamble is also betting big on multicultural after discovering that they record top performance among African American and Hispanic consumers in market share. Marc Pritchard, P&G’s chief brand officer, told the audience at the Association of National Advertisers’ (ANA) 2019 Multicultural Marketing & Diversity Conference that if P&G’s brands could match their general-market performance with multicultural audiences. “The size of the prize is big – up to $1 billion in extra sales just by achieving market shares equal to the national average on all of our brands,” Pritchard said.

Whatever your view on multicultural marketing, inaction is irresponsible

While reasonable marketers can disagree about multicultural marketing, all comprehensive marketing strategies must account for today’s increasingly diverse population. Whether you adopt the “minority majority” attitude, focus on cultural fusion, or embrace segmented targeting, successful marketing means recognizing and elevating a wide range of voices and cultures.

Tech Knowledge in Media Agencies: a Must or a Fad?